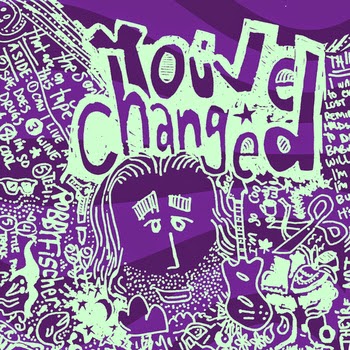 Robby Fischer is the drummer in Black Fruit, a Grand Rapids garage rock band whose split with the British band Factotum I posted about a little bit ago. It seems he's doing more than beating some fine drums in Black Fruit however, as he's go a full-length solo album. I'm gonna hazard a guess that Mr. Fischer is a fan of Ty Segall, particularly his albums Lemons and Melted, as his influence seems to be rife throughout these songs and I mean that in the most positive way. Even if the inspiration seems obvious (though let me be clear I am conjecturing at all times) it is in the execution that Robby Fischer shines.

You've Changed is a very fuzzy garage rock album that has a brilliant amount of psychedelic swirled in. All of these songs are distorted, and not a wee bit, but quite considerably blown the fuck out in a very deliberate fashion. I believe when done correctly this purposefully diminished fidelity is one of the finest things a person can hear. Therefore, you might imagine how much I've been digging this album. The songs are more than fast and loud, they're rather immersive in scale should you have the volume high enough and free yourself of burdensome distractions. You've Changed is the sort of album that is best heard from beginning to end, then at least once over again. Perfect for cassette listening, which is how you can purchase it. A move I strongly recommend.

To be had here:
Robby Fischer - You've Changed
Posted by Antarktikos at 2:14 PM