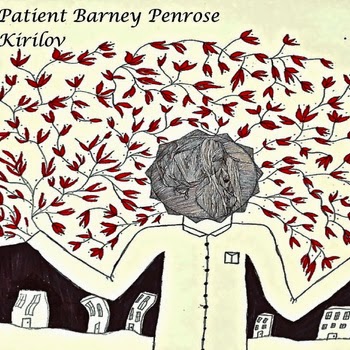 Not sure what it is but I've felt myself slowing down just a bit lately. That goes for most everything except what I'm forcing myself to keep up with for work. But I am getting out of bed later, drinking less beer and wine (you know, leaving some for another day), and enjoying slower, lyrical songs more than I had in the past. Knowing myself this is a brief stop on a cycle that'll keep spinning until I stop living, I've taken strides to take it all in. Thusly, Patient Barney Penrose's harmonious folk songs showed up at exactly the right time for me.

Kirilov has some genuinely beautiful folk songs. Rather stripped down sort of folk music, the type that seem like it was shyly thought up in a bedroom only later to be fleshed out into the melodic pieces presented here. The singer-songwriter is a Virginian living in Richmond and this is far from his first release but hardly the least notable. Indeed he appeared back in 2013 in a Grab Bag written by Elvis. There's no sugarcoating it, pilgrims, this is sentimental, one could even say sappy, folk. Yet, as I have always thought, anything but ska can be good if done well and this dude is real good. "Orchid's Song" has got to be my favorite, with the ambient sounds sprinkled in there that remind me of Mickey Newbury. Furthermore, the fiddle on "Wishbone" is capable of stealing the show. Check it out, it won't bum you out too much, rather to the just right bummed out mood.

To be had here:
Patient Barney Penrose - Kirilov
Posted by Antarktikos at 9:15 PM