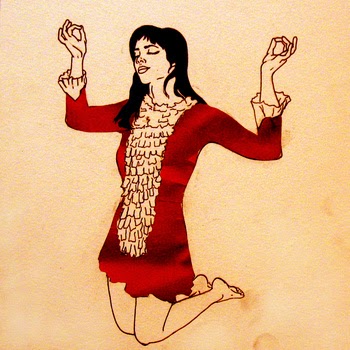 Back in school, I find myself procrastinating doing my homework by filling the cavernous amounts of this new laptop's empty memory by ripping CDs that've been with me since high school. And yet, while it's important for me to have as many copies of Faith No More's "Angel Dust" as is humanly possible and on every device I own, I don't really want to listen to it anymore.

Instead, I want to listen to new things, which is why we're both here at this moment in time, isn't it?

This band is getting my jollies off in a way that "Midlife Crisis" used to, I suppose. While they're completely missing that Mike Patton element that is crucial for anything to be good (at least, that's how I felt in high school) they are certainly still capable of dishing up that psychedelic garage shit that I hunger for as of late.

The Woozies appear to only have this release, and it's a damn shame. They've got a Mama's and the Papa's kind of vocal harmony thing going on, and more than that, they are clearly students of the psychedelic 1960s sound as they reproduce it to a degree that few bands of the same ilk seem capable. All of these songs are gems and worthy of a future Nuggets compilation.. And they're from Dayton, which is not-so-secretly my favorite city I've never been to. Seriously, whatever toxins are in the water there... give me a dose of that because I need some inspiration to get through this statistics homework.

The Woozies - The Cassette Tape
Posted by Amazing Larry at 1:37 AM