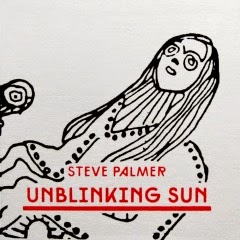 Steve Palmer is from Minneapolis, MN and plays psychedelic folk that bears heavy influence from both krautrock and the American Primitive of John Fahey. Unblinking Sun is a hard-to-predict album because eccentric influences, and that unpredictably is truly an asset. Parts of it are undoubtedly pulled straight from the guitar picking tradition that Fahey inspired, of which I can never get my fill, and like Fahey himself Palmer wasn't afraid to get experimental with it. It has the trappings sound collage with touch ambient noises and spoken word that provide the far out psychedelic folk with a theatricality. Nonetheless, it really is Palmer's amazing skill with the guitar the makes this album anything at all, and boy howdy can he play.

Normally I would not share a link to an incompletely streamable album, but it is my bad that I failed to share this in the window where it was fully listenable and also(I got a link for the full streaming for those of you interested in hearing it all before purchase), these are our buddies over at Dying For Bad Music putting the album out. I defer to their wisdom and will tell you that you'll have to believe me that the second half of this album is as good as the first.

To be had here:
Steve Palmer - Unblinking Sun
Posted by Antarktikos at 1:23 PM