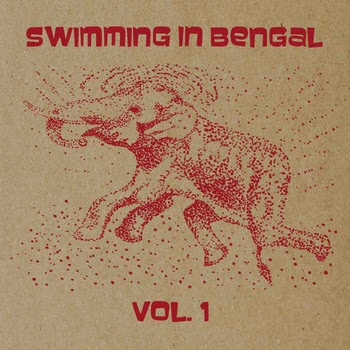 The name of Swimming in Bengal and the album art adorning an elephant seemingly floating should be enough to suggest what sort of music is on this release. The band already summed it up nicely on their bandcamp and what I hope doesn't mark me as lazier than I am, I'll relate that: "Improvised out-jazz/art rock with a focus on Middle Eastern/South Asian melody, rhythms, and drones."

That would have been more than enough to have gotten me to give this album a listen, but I didn't get this album sent in, not in a straightforward fashion at least. However, a couple of years ago I was sent in an EP called Drought Times by a group called San Kazakgascar, which proved to be an incredible listen and well-received by those few readers that give me feedback. In an unfocused review of past posts and I have curious to see what that group had released since only to find a new name but on the same bandcamp page, on the same tiny label, Lather Records. It seems San Kazakgascar took a break and the gourd guitarist (yeah, gourd guitar, people) formed a new group to make music inspired by the Indian Subcontinent and Middle East. Swimming in Bengal is this renewed effort's results, and if the naming Vol. 1 is a hint, hopefully just the beginning in a series of releases.

Now, this is improvisational music, a sort of free jazz with Eastern instruments. Therefore, it is something to be heard while chilling out and having something at least a touch mind altering, even if that's just a nice pipe of tobacco or a bottle of cheap wine. Or it could be Larry's weekly allowance for robotripping, however you manage it, the album is fucking great when you get into the right headspace. You'll know it when you get there. Or hear it sober, it is still great.