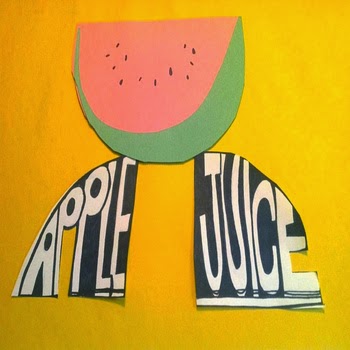 The return of the much lauded Lawrence, Kansas-based experimental musician Nate Henricks. Followers of Spacerockmountain should recall the several previous posts on releases from Mr. Henricks and the interview with him on an earlier episode of our podcast. So I don't think it'll be a stretch to imagine my excitement at seeing that he's gone a released another album, I believe this to be his fifthteenth. Apple Juice carries on and simultaneously deviates from the themes of the recently preceding albums like NEON FOR NO ONE and HORSERADISH, that is as much as a theme can be applied to experimental pop.

Overall, the songs are still very much in the camp of bedroom psych-pop that I've used to describe Henricks' music before, but the songs that begin the album have a harsher and cheerful tone, with more dissonance and erratic features that caused be some jostling upon the first listen, yet no means did I dislike it. In fact, the listener shall notice he circles back to this style with the track, "Tazareth," where some post-hardcore seems to have seemed in. Now, there are songs that'll fit the E6 sort of fuzzy psych that Henricks is a master at if he so chooses, and the two 'live' tracks "Vegetarian Dog" and "Your Arcade Prize" are instant earworms in this vein. I found myself humming each of these at work all week long. However, what makes Apple Juice as an album a truly awesome listen in the variation in throughout the short batch of songs. Being only 21 minutes it begs repeated listenings, and has I did so I found myself looking forward to all the weird, noisy and uncharacteristic parts as much as anything that could be considered a single out these tracks. The chiptune boops and beeps he throws in, the howling singing for a minute, the dark guitar riff and sound effects all add up into a wild display, which is more coherent than sound collage for sure but bears some relationship. The final number, "What is Not the Answer," is even a country tune, and a beautifully done one at that.

To be had here:
Nate Henricks - Apple Juice
Posted by Antarktikos at 6:51 PM