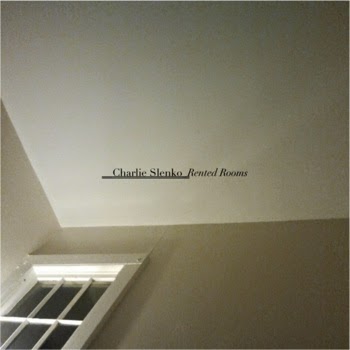 There are a many things I find displeasure in. I've had to pointed out to me repeatedly lately and throughout my life really. Means I am a grumpy and rather morose man typically, which I tell myself is the ideal temperament of a bookseller though I bet my bosses disagree. A few beers and a good rock album can smooth it all over most of the time, making me into an more animated and cheerful person, but at other times nothing but some old fashioned gloomy music and a history book on a sad event will serve as a salve. Misery loves company, even if that company is abstract example from of the humanities.

Here enters one C. M. Slenko with an album full of beautiful, somber songs. Slenko is on the Sioux Trails label, and like his labelmate that releases as Galápagos Finches he plays stripped down folk music. Perhaps more obviously influenced by the old blues and folk musicians that preceded him in that long tradition, he sings on topics they'd be familiar with, indeed that most anyone that sit around philosophizing for oneself should be aware of. The affects of a lonesome, melancholy mind setting upon itself, starkly analyzing one's own foolish habits and self-imposed restrictions while acknowledging the absolute human limitations that weigh on one wishing to live a fulfilling life while being unsure of any world beyond. It is creepy how many of these songs could have been written by a musician following me around with a guitar and harmonica as he described my day-to-day. It isn't glorious, but it is true.

I did warn you all that the autumn was gonna bring some less cheerful music with it. Sure, I won't go as far as to say Slenko has a hidden optimism, more of a dogged self-determination. However, like in the recently posts of Galápagos Finches, Slight Birching and The Pathetic and Elegant the camaraderie of knowing the songwriter is empathetic to your self-criticism and doubtful nature is a soothing experience in and of itself.