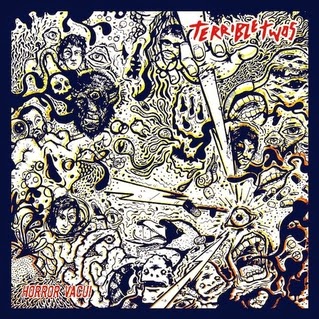 It isn't often that I posted about a band that I have any personal experience with. There are times I post the music of my friends that make improv weirdo folk, but even they will not act like that is a serious endeavor as entertaining as I find them. While I can't imagine the Terrible Twos take themselves very seriously either, they are definitely a thing. A thing I recall seeing at various venues in Detroit throughout my college years, getting to chat with some of the band members that I was introduced to from mutual friends immediately after which I am sure we both forgot the other's name. To be honest I'm like that with nearly everyone in my life, I can't even learn my second cousins' names until I see them a dozen times. However, as little as I clearly recall from the under-slept and overly drunk long evenings made an impression on me, and I fondly savor the hazy recollections I still retain.

The second full-length by Terrible Twos, Horror Vacui, bears I tremendous resemblance to the live performances that I half-remember. The songs are fast, incredibly fast. On top of that they're distorted and loud with singing that isn't quite intelligible (though reasonable mixed). It's the sort of punk rock that makes you wanna stomp around and throw your arms about, and as I recall those things did happen in spades at the shows. Music to get fucking excited to experience. While it is brutal and lo-fi, it isn't without artistry. They songs are composed of what sounds like a well-trained set of performers that allow a degree of chaos to swell up in the moment, even in the recorded and therefore unchanging version. Horror Vacui has captured that live chaos but isn't so disorientating that it's just noise and hollering. They're making songs just ones that are supremely intense in nature. A fine example of this is "Sickness of the Swan" wherein the shouted lyrics, pounding drums and loud guitars drop off for an awesome keyboard break and then it all swells up like a bucket of sloshing water. I adore it.

Horror Vacui is being released by Detroit's Urinal Cake Records. They've got the whole album streaming for free, and a digital version it is being sold on iTunes, which I am sure you can figure out for your-goddamn-self. There was a vinyl pressing as well, which I am sure you'll also manage via the label's site. Check out there other albums if you like loud, fuzzy garage punk as they've got some band I really dig. And they're streaming as well.

To be heard here:
Terrible Twos - Horror Vacui
Posted by Antarktikos at 8:25 PM