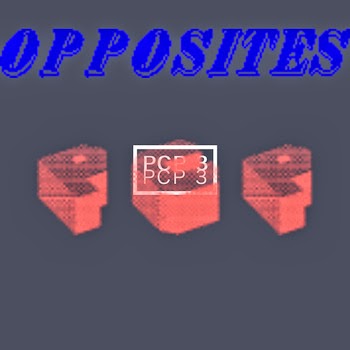 Chicago's Opposites have a loose sound and structure, as they name of this album would imply, as if they were practicing. This doesn't mean it isn't interesting, more that there's a certain lack of urgency that makes the songs relaxing, even when they're relatively fast. Once again I am gonna have to rely on my love of Elephant 6 for a comparison, as the singing reminds me of Andy Gonzalez of Marshmallow Coast, and the vibe of the album reminds me of his Marta Tennae side project. Strange, psychedelic but never overwhelming or intense, a subtle but effective sort of meandering in sounds. Although, Opposites seem to have a more rock and roll sound that those projects, the feeling is there. All that said, I felt very comfortable listening to this and found myself endearing to the tracks and looking forward to the same little bits and flourishes with each play.

This album is being put out by Grandpa Bay Recordings of Chicago, which some of the more attentive readers may recall from the Mao Tzu albums they've releases in the past, including the split with This is Lorelei earlier this year.

To be had here:
Opposites - Poorly Captured Practice Vol. 3
Posted by Antarktikos at 9:05 AM