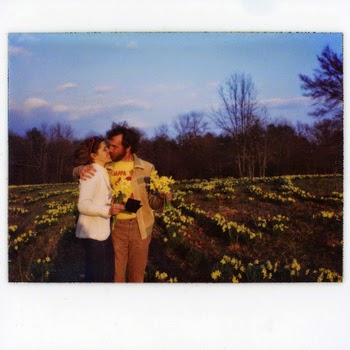 Rick Eat Acid is a band on the Orchid Tapes label who put of wonderful lo-fi electronic music. I have often praised the label and the artists put out on it, and this review will have some of that same praise, but I think it'll be interesting to dwell on what is so allure about this sort of music for me and others. So time for me to muse on lo-fi electronic/chillwave/glo-fi/sound art or whatever the fuck we'll end up calling it.

The sort of music I am talking about ranges from the sample-based looping of Monster Rally to the dream pop and shoegaze tinged Wizard Oz, Home Alone and Tearjerker to the sparsely done, sometimes spoken-word infused tracks of Foxes in Fiction and Ricky Eat Acid. This is a considerable amount of ground to cover, but I feel the artistic implications of all these musicians is similar in their striving for a mixture of introspection and nostalgic in a melancholic but all too necessary angst of being. Not that this isn't punctuated by intense fits of joy and pleasure, but that those are highlights that gain significance all the greater from the feeling of the rest of the compositions. Now, this could be said of shoegaze, post-rock and slowcore, however I feel what makes this stand out as not only a genre but something I've come to greatly appreciate is the very sparseness of the songs. There are few lyrics often opting for a spoken word sample instead, few instruments beyond the computer and none of the complex polyrhythms and epic building toward crescendo of post-rock or longer psychedelic tracks. Overall, this music seems to share numerous qualities of ambient and sound collage but with a more concise vision as far as I've interpreted it. Perhaps these artists I've cited won't even be considered generically unified in the future, but I have found their emergence not a mere coincidence.

As for Ricky Eat Acid in particular, it is a wonderful album that shows the degree of emotional impact this sort of music can hold. The tracks go from soft, ambient wanders to the techno-inspired sort of oddity that is "In my dreams we're almost touching." I've been putting this album on nearly everyday after work for two weeks and I still feel like it s showing me new parts and ways that it is subtly inching it's lo-fi message of love and longing into my head. Put recalling my young days as a church-goer before my folks just abandoned that idea altogether and every now and then being pulled to a church by a friend was brought back starkly by "In rural virginia; watching glowing lights crawl from the dark corners of the room." Yes, they all have wonderfully long titles like that. I'll end with this, check it out and see how it makes you feel, or you can wait for another loud garage rock album, because I too am looking forward to that.

To be had here:
Ricky Eat Acid - Three Love Songs
Posted by Antarktikos at 12:54 PM