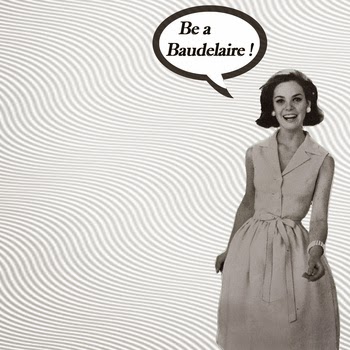 While I am sure it wasn't their intention, this Australian four piece really played to me well by naming their band for a French poet that I have lost more hours than I'll ever confess to my boss reading when it got too hot to shelve books. What I bet they might've known when submitting is that they're from Melbourne and I have been fixated on exploring the lo-fi indie music from Australia as of late. However the circumstance, I have taken the bait and listened. As far as I can tell the name is all they share with eponymous poet, as I don't think he was making shoegaze and blues rock tunes (but, holy shit, think of what that would've been like). What these Baudelaires have put forth almost seems like two bands, with the first series of tacks on this six song release being dreamy shoegaze songs with shimmery guitar and mellow bass, with a seven minute plus drifting epic in there. In fact the psych-shoegaze tone hold true until the fifth track, "Samariterstrasse," during which the beat becomes markedly more bluesy, and this is even further delved into with the final song, "Broke Down Blues." For this last song they've made a music video of for all our enjoyment. It is like the Lazy Aftershow, from my other fixation nation of Greece, meet with the most influential blues rock band of my teenage years, the Soledad Brothers, but like oil and water they are sitting separated in the bottle. I suppose to nice things are better than what could have happened if they tried to force them together, and I sincerely liked all these tracks for what they are.

To be had here:
The Baudelaires - Be a Baudelaire!
Posted by Antarktikos at 3:04 PM