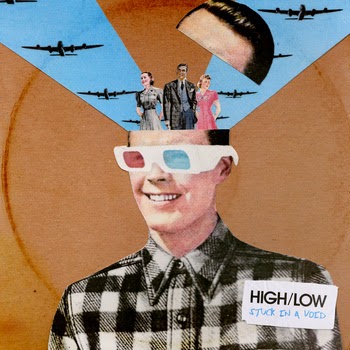 The debut album for this lo-fi rock outfit hailing from the United Kingdom, Stuck in a Void is a very fast-paced and fuzzed out set of song meant to be heard loudly. The influences of High/Low seem to be heavily embedded in the 90s with the post-grunge vocal qualities of raw emotional strain tempered by certain whimsicalness.  It is a tension that works brilliantly when employed well and it never hurts to be loud as all fuck when going for it. High/Low has accomplished this feat and then some, with the franticness of their compositions that are packed with guitar riffs, bass fuzz and thunderous drums that middles between rhythmically acute and dissonance. All that said, and wholeheartedly meant, the tracks with some angular playing thrown caused by ears to perk up even more such as "What Is It?" and "No Light" and had it repeatedly listening to them. Additionally, they've already got out their Forty and Raygun EPs as well, and although physical copies are sold out they are NYOP digitally.

To be had here:
High/Low - Stuck in a Void
Posted by Antarktikos at 8:45 AM