Tex Williams and His Western Caravan - Artistry in Western Swing (????) 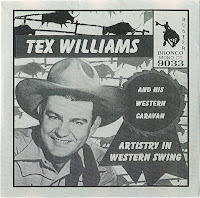 I was first made aware of Tex Williams by some old 78 rpm records my mother inherited from his grandma. Upon looking him up I saw he was categorized commonly as a western swing musician, which I hadn't a clue to what that encompassed. However, digging into that is how I came to find Moon Mullican and due to that beautiful success I decided to hunt down something by Williams. Hopefully I can sum it up without offense as a capitalization of the swing craze/big band sound with the wholesome country music of the era. While appearing (and surely acting) super-WASP-like there's some obivious influence of black music, insomuch that they play "boogies." However, there's polka numbers to be heard, which pleased me to no end for I've a guilty pleasure in that terrible music. So what we've got here is the first compilation that I could snag off of peer-to-peer sources and I can't even get a good fix on the exact day it was issued, but I'm figuring in the late 90s. It leaves out the most famous song by Williams, "Smoke, Smoke, Smoke" that was really just a novelty (and in my opinion not the best he's got to offer anyway). Truly is some old-school analog (sorry for the shit bit rate) country though that's been great to listen to before work lately.

To be had here:
Tex Williams and His Western Caravan - Artistry in Western Swing [128 kbps]
Posted by Antarktikos at 8:51 PM