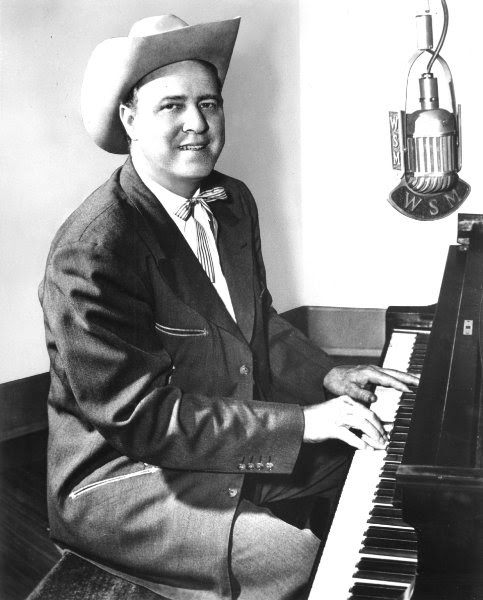 It's no secret that I've really been into listening to blues, soul and old country music lately. Well, as I access the internet in short periods, and not even everyday at this point I've developed a habit of jotting down names of all sorts of musicians to look up whenever I've got a couple of hours to tool around online. One such musician is Moon Mullican, a figure that straddles various styles of music that'd consolidate into genres soon during his career. He was simultaneously a country musician and an early pioneer into rock and roll. Openly admitting his debt to black musicians, he used his piano to play blues and boogie numbers as skillfully as swinging western tunes. Perhaps it should make sense that is recordings are terribly hard to tell between rock, blues, or honky tonk if it wasn't for the habit of titling tracks with the style ("Rheumatism Blues," "Cherokee Boogie" or "Honolulu Rock & Roll" for example). I found a site that has a bunch of his tracks for free download, but they're not arranged in any official format. Something like a lesson in how a skilled pianist can play nearly anything they fancy and have it be mesmerizing. Sure they're low-quality copies, but it didn't bother me at all.
To be had here:
Moon Mullican
Posted by Antarktikos at 2:41 PM