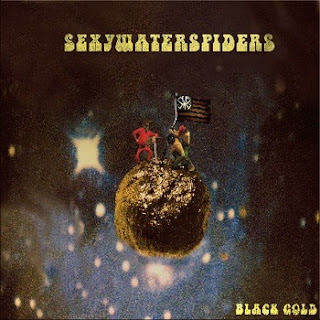 When I moved to Portland, Oregon, one of the first things I noticed were the bumper stickers and signs everywhere that read "Keep Portland Weird". Over the course of that first year, Portland's weirdness revealed itself in many ways, usually in the form of costumed pub crawls and costumed (or naked) bike rides. At first I was intrigued by the weirdness; then proud. I even participated in a pub crawl dressed as a lumberjack in hot pants. But everyone gets to the point where Portland's weirdness becomes embarrassing and/or annoying, as it has for me 6 years later.

A Portland by way of Salem trio, SexyWaterSpiders play an adolescent, bluesy psych rock. They don't take themselves too seriously, and they don't want you to take them too seriously, either. This point is made evident by their 10 minute forays into new age psych pop and cheesy power metal. Actually, all the songs on Black Gold have a tongue in cheek sneer through which the tongue is more directed at the listener …almost to test your patience and ask "why so serious?"

First listen aside, they aren't just a weird Portland band. They're a breath of fresh air in a city that's nearly choking to death with conventional rock bands uninterested in testing the boundaries of their own "coolness". That said, there is something undeniably cool about them. Their songs are good and at times evoke the likes of Jon Spencer, Royal Trux, Railroad Jerk …even The Fugs. And while they may not be as garage or punk as those groups, the SexyWaterSpiders approach their music with a similar playfulness that escapes a lot of musicians these days.

Posted by Amazing Larry at 9:15 PM