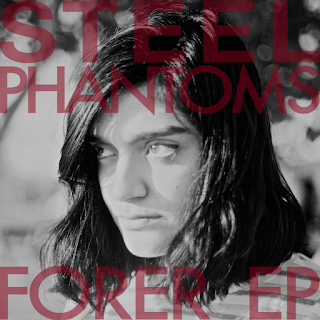 Hello and word to all the readers of Spacerockmountain. I've been invited by the gracious Antarktikos to contribute to the blog so, formalities aside, let's get on with it.

For my first post I'd like to draw your attention to a Brooklyn band that is bound to make the Pitchfork nation cream their collective pants. I speak of Steel Phantoms… a three piece with just the sort of jangly pop sentiment that pervades much of the current indie rock sound. Now, if you're at all like me, mere mention of the word "jangly" is enough to make you raise your hackles and spit venom in a baby's eyes. That said, Steel Phantoms offer more heart and imagination to their brand of music: there's no ivy league Kwassa Kwassa here, just the authenticity of music lovers making music they love.

While influences don't stand out and bite you, there's a bit of a nod to bands of the 80's. Imagine Men At Work taking turns with Jesus and Mary Chain in Isaac Brock's recording studio and you're in the ballpark.

Singing and songwriting are shared duties between two of the band's members. Drummer Aaron Harris, formerly of the band Islands, has a higher voice and writes spritely, anthemic songs while keyboardist Yos Munro sings with a lower, unique timbre… like the voice of a sad giant. The duality works for this band, much as it did for The Halo Benders. The high and low registers compliment each other well, as do the songs on this EP as a whole.

Posted by Amazing Larry at 8:53 PM