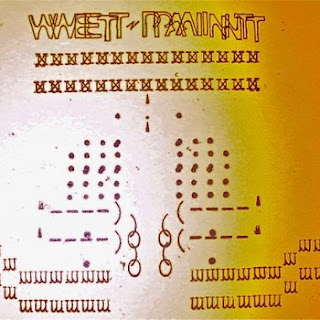 Wet Paint DMM are a now defunct Seattle 3-piece who are too good to not share with you, though I'm having difficulty describing their sound in a non-convoluted way. I keep wanting to say "deconstructionist post-punk performance art" but then I immediately want to punch myself in the mouth.

Their sound is minimal - one drummer, one guitarist, and one singer - but what they achieve is quite dynamic.

The drums provide a brutal, dark and tribal canvas over which the guitarist paints strange and dissonant colors. At times, like on "IT IS THERAPEUTIC"  and "LION TAMER", the guitar sounds like it's being played through circuit-bent effects processors. The most striking element of Wet Paint, however, is their powerful vocalist. Her dramatic delivery is just that: part poetry, part performance. At times she sings, but mostly it's a very animated and urgent one-sided conversation that sometimes devolves into moaning or animal noises ... like she's either having an orgasm or killing someone. Maybe she's doing both. Her contribution alone would put Wet Paint's non-existant record into the "Kabuki theater performed in an insane asylum" section of the record store.

Long and short of it is... Wet Paint's sound is dichotomous and treads lines between art and rock; sex and nightmares; blood/soil and extraterrestrial mechanics. It's intellectual meets visceral, the line between which lies the heart. It's postmodern, I suppose, but without pretension because what they achieve is very authentic and full of heart.

This is aortic music ...bubbling up from a prehistoric stew.