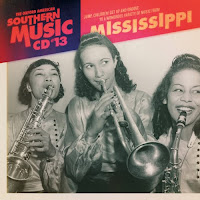 This year's music issue from the Oxford American came out in March. My brother gifted me a copy for my birthday, just as he gave me last year's issue that compiled Alabama musicians. As the title indicates this is on Mississippi musicians spanning from the 40s to present, but naturally enough heavily focused on the blues that had much of its genesis in the state. I've hardly gotten a chance to read any of the magazine which is filled with lengthy articles on the artists individually, and they're written far better than anything you can read on this blog. Basically, I am saying buy the fucking magazine because you'll fucking love it, which I say purely on the weight of how wonderfully done the previous music issue was. For real, it's got Bo Diddly, Guitar Slim, and some amazing cats called Leon Bass & The Keystones. So throw down the money and get something awesome to read instead of doing work.

To be had here:
Oxford American Music Issue #13-Mississippi
Posted by Antarktikos at 10:19 PM