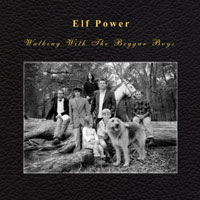 More Elephant 6, as I mentioned I wasn't depleted yet nor shall I be after this. I wanted to do a big posting of all of Elf Power's discography, but that proved to be too daunting of a task for me now due to its size. Nonetheless, Elf Power was an overlooked part of the Elephant 6 collective. Naturally, they're connected to the Athens, GA scene and have featured various musicians both from the E6 collective and outside of it on their albums. In fact the titled track of this album has Vic Chesnutt singing on it. Elf Power, largely the brainchild of Andrew Rieger and Laura Carter, is one of the more prolific entities in the collective, with Walking with the Beggar Boys being the seventh album. Now they've got a dozen, not counting the early self-released material. I picked Walking with the Beggar Boys because it was where I was first introduced into the band. It has more southern rock influences in lightly psychedelic rock/pop, whereas earlier productions where more heavily psychedelic pop and they've not remained static since either. It's a fine album that is incredibly replayable even though I've been listening to since its release.
To be had here:
Elf Power - Walking with the Beggar Boys [160 kbps]
Posted by Antarktikos at 2:43 PM