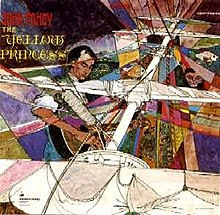 It's been a while since I told everyone how much I enjoy John Fahey's guitar playing. A long bit ago I posted his The Voice of the Turtle, which remains one of my all time favorite albums. Fahey's personal story is nearly a dramatic and interesting as his music too. He was rather down and out for a period, having lost what I think was his third wife and being terribly ill, broke and nearly homeless. This was reversed in with a upswing in his popularity with a new generation of music fans in the final decade of his life. Though this didn't prevent him from writing a book entitled How Bluegrass Music Destroyed My Life. That book is gonna top my Christmas list this year for sure. The Yellow Princess actually came out the same year as The Voice of the Turtle, along with two other albums. It's likewise a golden example of of Fahey's steel-stringed brilliance as a master of folk music. Sometimes it is consider some of his more stunningly technical work. So yeah, dog, it is the bee's knees.