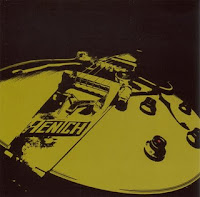 The Hentchmen are a band I always assume people know of, mostly because many people my age in Detroit do. They were one of the very first modern Detroit garage rockers for me to have gotten into when I was a teenager. More or less I had to teach myself how to download music just to get them because records in my area were already history. This particular album is among the very few CDs I've ever bought and though I've always disliked using CDs but, I wanted this as soon as it came out. Since then it is been lost, but I have been listening to in the digital form ever since. The Hentchmen have the sound that I've come to most identify with garage rock, that is lo-fi, mostly lighthearted, and infused with elements of surf. I did post their album Board Appeal a long while ago so with this my two favorite of their albums are available.
To be had here:
The Hentchmen - Form Follows Function [160 kbps]
Posted by Antarktikos at 1:54 PM