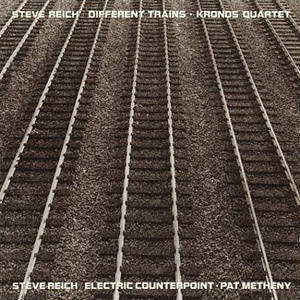 I posted this on my blog months ago but decided to repost it because it's amazing.
Broken up into three movements (Before the War, During The War, After the War), Different Trains utilizes minimalistic orchestral arrangements, vocal samples and digitally transposed recordings of trains used during World War II from Europe and America to offer up a modern classical composition musical perspective of the war. From Wikipedia:

"During the war years, Reich made train journeys between New York and Los to visit his parents, who had separated. Years later, he pondered the fact that, as a Jew, had he been in Europe instead of the United States at that time, he might have been travelling in Holocaust trains."

What really makes this album interesting is how Steve Reich uses samples of voice taken from interviews about their experiences during WWII and builds melodies based on the cadence of their words (an idea also used in Charles Spearin's 'The Happiness Project') and perfectly integrates things like war sirens into the overall structure of the compositions. Chilling and beautiful stuff. A good starter place for Steve Reichs' music.