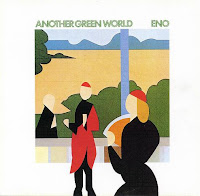 I listened to this record in its' entirety more than anything else over the Christmas break and it's grown to be one of my favourite records of probably ever. The story behind this record is really interesting (which can be explored further in this book). Brian Eno amassed a bunch of musicians to make this album and entered the studio with no demos, ideas or preconceptions whatsoever about what this album was going to be or sound like. He utilized every tool and creative facet available to him to turn out this beautiful self-produced record. This was all before he produced his ambient records, though with about 75% of the record being instrumental passages, it's pretty obvious to see what direction he was going to be headed in. I love every second of this album.