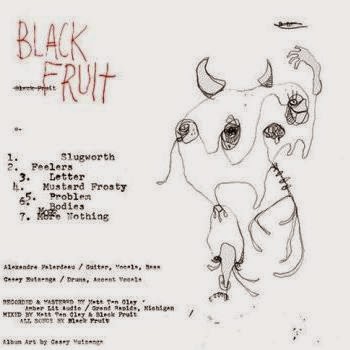 What we have here is a split album, something you might have pieced together from the title of the post. You might not have guessed that they're garage rock bands from Michigan and another from United Kingdom. Nonetheless this is very much the case.

Black Fruit are from Grand Rapids, Michigan, a city on the other side of the state from yours truly and one I fail to understand fully but has produced its fair share of excellent bands. Black Fruit is a particularly awesome example of this. Moreover, they put out the majority of the tracks for the split (7 of 12 songs) allowing for you to soak of all the lo-fi bliss their belting out. Fuzzy guitars, loud and steady drum beats and almost totally incomprehensible singing. The songs are infused with a healthy degree of both surf rock and mild nihilism. It's funny how those blend so well.

Factotum is a British outfit, who while certainly being garage rock are of a different sort. The sound is more grungy and filled out with a psychedelic style. Additionally the singing is more abrasive and akin to post-hardcore garage punk. The songs are intense and rumbling, so while the songs are the minority of the split they haven't any trouble holding up their end of the bargain. Overall the split is indeed an interesting contrast in the varieties of garage rock that are existent, but I would be hesitant to say they show any UK-US rift in the style (this is how the email pitched it to me). Especially because I remember Whirlwind Heat, a Grand Rapids based garage rock band from a bit over ten years back that was more like Factotum than their fellow Grand Rapidians Black Fruit.

Finally, the album is due out physically as a colored vinyl, I believe in March, by Stolen Body Records. So if you liked what you heard and want it on wax, look out for that.

To be had here:
Black Fruit/Factotum SPLIT
Posted by Antarktikos at 1:53 PM