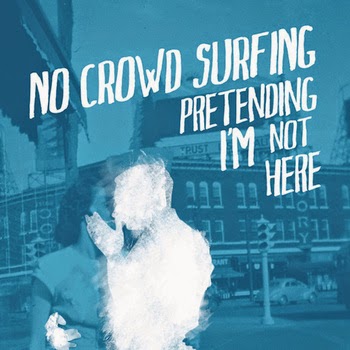 I am finding myself listening to submissions late at night. Not sleeping well these days, mostly because I'm fretting over everything and in particular my shitty car. I have been shifting it by jamming my index finger into where the shifter once was and rotating the steering column with my other hand. Basically, things have been far from ideal. But the music keeps coming and so long as I can pay the phone bill I have some little access to the internet to hear it. Tonight a band that sounds incredibly familiar for it being from thousands of miles south of Hamtramck's unplowed streets.

No Crowd Surfing are from Cianorte, Brazil. This isn't where most anyone I know would have guessed first, even excepting the fact that they've never heard of this medium-sized city in the south of Brazil. Furthermore, it isn't just because they sing in English. What and how they're playing was so geographically disconnecting for me and I imagine for most North American listeners. Pretending I'm Not Here is an album that could very easily be passed off as emanating from Grand Rapids, Minneapolis, Hartford or countless other American cities. You'd be wrong though, and I only bring this up as it shows the influence of these Brazilian musicians lies heavily in the genres popular in my own adolescence here in Michigan. These are lyrically driven songs with full to bordering on cacophonous instrumentation that are the result of low fidelity recording techniques, an option made out of necessity as much as anything else. As for those lyrics, they're angsty and charged, you know, like emotional rock so thoroughly was back in the late 90s and right after the turn of the decade. No Crowd Surfing hasn't reinvented the wheel, yet they've proven themselves capable musicians and most admirably holding to an aesthetic they clearly relate to. I'd like to explain that when I was a teenager this music drove me crazy, but as I get older and see it from a more elongated view I can see the charm in it I missed as a confused, sixteen year old fan of Lou Reed and Freddie Mercury.

To be had here:
No Crowd Surfing - Pretending I'm Not Here
Posted by Antarktikos at 10:28 PM