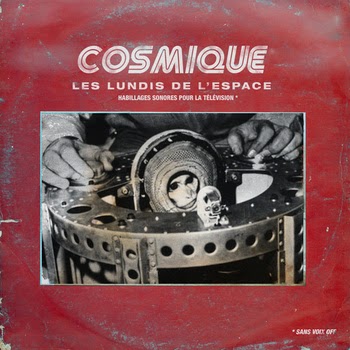 It wasn't very long ago I wrote about my rediscovery of the French independent label, Cocktail Pueblo, when I shared Les Princes du Rock. It wasn't the only thing that caught my attention however. Les Lundis de l'Espace came across immediately as a release worthy of some attention, if for nothing but the very neat retro design of the cover art.

Not surprisingly there's not much online about COSMIQUE save what goggle can translate on on the label's website regarding this album. From which I've pieced together is that the band is a duo and that is Les Lundis de l'Espace (Mondays in Space) this is a concept album, masquerading as a soundtrack to an astronomical television show. How can you not be on board already?

The tracks themselves a quite short, some last only a few seconds, so even with 31 of them the whole playtime is merely 22 minutes. What's heard on these brief "songs" is enthralling. It might be hard to imagine them as a soundtrack to anything that wasn't about space. The absolutely otherworldliness is so powerfully present that should I ever catch a rocket to beyond the sky I would be disappoint not to hear these tonal, ethereal numbers chiming in my ears. It's weird, in the best ways.

To be had here:
COSMIQUE -  Les Lundis de l'Espace
Posted by Antarktikos at 6:49 PM