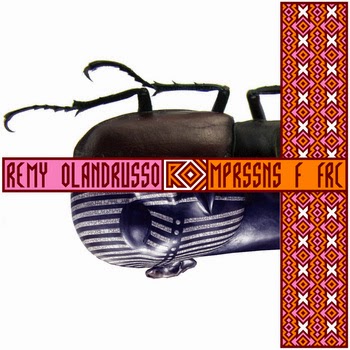 Tags on bandcamp are a funny thing. They can be anything the poster of the album decides naturally, and sometimes it they are as vague as can it can fucking be and other times they're beyond genre descriptors, to the point of substituting for a biography of the artist in a backward fashion. Remy Olandrusso has done just that by tagging this album with phrases like "growing up on John Carpenter" and "suspect cultural appropriation." In many ways they tells me more of what to listen for than any words like experimental or drone, though this album can be called both of those. The best tag by far is "unhealthy oulipo obsession," which for a reformed used bookseller and fan of Queneau and Calvino is a sediment I can relate to all too well.

On first impression I believed this would be a math rock album, as it was submitted due to the musician noticing his friends, fellow Chicago-based fellas of Imelda Marcos, were written up. While there certainly is some mathiness to the album it isn't an assault of the angular guitar, rather a step more out into the bizarre.  MPRSSNS F FRC very well could be the soundtrack to a creepy Carpenter-esque film. A weird arthouse one, but I'm sure you'll hear the cinematic quality in the mood of these songs. Equally surreal, anxious and hypnotic. It's incredibly hard to categorize all the different sounds he's layered upon each other, but they are woven in a entirely compelling way. To top it all of they've got the closest thing I can imagine to a ransom note cut out of magazine print I've seen for track titles, such as delightfully named "th3 h1v3 s3nt1n3ls r1s3 t0 sh4rp3n th31r bl4d3s." It might not be recommended to listen to it alone in the dark but I did it and felt fine.