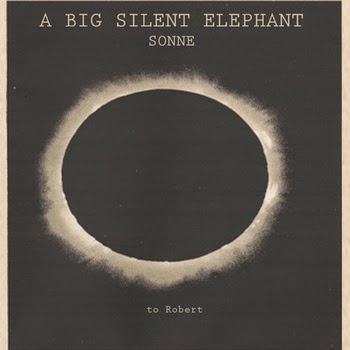 Sonne has a fragile sound. A low fidelity and bizarre instrumentation of this psychedelia causes sound like it on a stiffening magnetic tape, ready to break and leave you wondering at the songs you've missed out on. It is like were lucky to have found these delightful, weird songs at all, which even if they are a digital release that's infinitely reproducible. Surely it is thanks to the internet that something like this could even find such a wide potential distribution.

The songs are mesmerizing in their minimalistic states. Often there won't be much more than enchanting lyrics, sung in a irreverent or ghostly choir-esque style, over acoustic guitar, simple percussion and various key and chimes that sound as if they could pass for child's playthings. This isn't to say the songs lack in any profoundness, they are moving in their own strange way, being very relaxing yet surreal. Perhaps the best example of this is "Oh Acid" but I would also suggest "Junk & Poison" and "Kollapsed" as fucking amazing tunes to have a beer and stop worrying about life to. Overall, I would highly recommend this album to fans of Nate Henricks or IL CULO DI MARIO, as while neither of these are quite the same style, they share a mood.

A Big Silent Elephant is a new moniker for an Italian musician sometimes known as Mauro Da Re, who's become a reoccurring presence on Spacerockmountain. He previously went by a Man with a Broken Piano, having put out a few EPs under that name and a collaborative effort with the Turkish musician called Beyza. This new full-length from Poland's Resonating Wood Recordings was previewed in the Starlight 7" release of two of the track through the same label.

To be had here:
A Big Silent Elephant - Sonne
Posted by Antarktikos at 8:46 PM