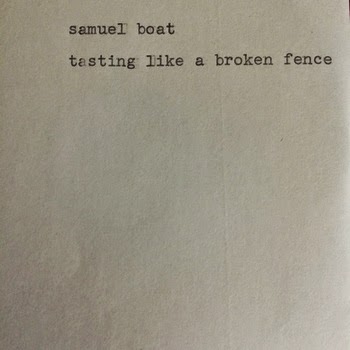 This is the second album that Samuel Boat has released this year. Some of you might recall Soda Pop Rock that was put out back in May and written up my yours truly as well as covered on the podcast. Stylistically, this new album hasn't strayed too far from the prior, however it does seem to have a bit more melancholy mood. You know that sweet bedroom pop melancholy were sadness is mixed up with cheerful instruments and it makes for a contradictory feeling that hard to express in words alone yet music excels at. Tasting Like A Broken Fence has several fine examples of this capacity with tracks like "walkin'" and forlorn love song "rain day."

The album is short, with a playtime of only 20 minutes, hardly longer than many EPs we share. The brevity is an asset as soon as you get to listening the final track, "from the best," you'll find yourself wanting to right back to the beginning and hear it all over again. The songs are among the best earworms I've heard come from the submissions to the blog. Basically, I am gushing because I can't get these damn tunes out of my head, with the catchy keys and soft guitar and what-have-you. Also check out the two tracks that he put out back in November, Thanksgiving Sampler.

To be had here:
Samuel Boat - Tasting Like A Broken Fence
Posted by Antarktikos at 10:58 AM