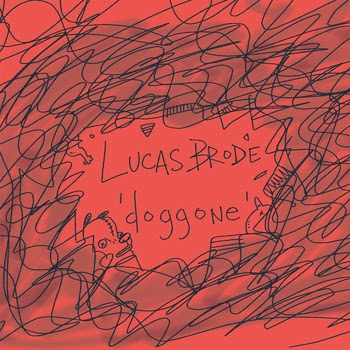 A spilt LP by two fellas hailing from the state of New York. Both can easily be considered experimental, though of differing varieties. Lucas Brode makes use of a guitar as his certain instrument, indeed at times the only instrument to be heard, with gesticulating, angular playing to which the best comparison I can summon is Ecstatic Sunshine, but toned down and with one guitar. Doesn't need accompaniment, he does just fine at producing remarkably stark, subtle and evocative tunes all on his own with his "mostly tapped guitar lines." I don't know tapped guitar lines are because I'm a fool, but he said it and I liked it.

Bubba Crumrine seems to a man to know in Ithaca, NY and is in the mathy post-rock band Mouth to Mouth to Mouth. His solo work beings rather towards ambient but quickly jumps headlong into noisy avant-garde experimentation.  Even delves into creepy, effected spoken word over strange instrumentation on the track, "Iridescent & Gold," to move to intense noise during "Acme" just thereafter. Both of the musicians are out of a limb in the way I really appricate, totally worth hearing if you're in the mood for something unusual, gloomy and loud.

To be had here:
Lucas Brode & Bubba Crumrine -  'doggone' // Shedding Those 11ft Wings
Posted by Antarktikos at 8:57 PM