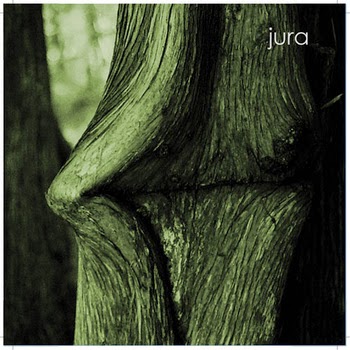 I heard about Jura from a member of Jura. He is actually a coworker of mine at my new job, in fact he's the man whose position I assuming upon his upcoming departure. Just so happens he plays in a post-rock outfit based in metro Detroit, so I couldn't help be find myself rather curious about what they sound like especially as I have been listening to a bit more post-rock and shoegaze music, recalling my fondness for those etheral songs from Montreal's numerous Silver Mt. Zion connected bands.

As listeners for the more experimental genres, especially the often subtle post-rock and ambient tunes available, will recognize the key to a good album is sustaining a heady, intangible mood throughout. It's very easy to approach such music passively, in fact that is the first instinct. To soak in the sound. However, lately I have found it incredibly rewarding to set other tasks aside, to merely listen and imagine with the music with nothing more than a single can of beer or a hot cup of coffee in my system. This is how taking in Jura's self-titled album went from me pretending to read a novel while listening to sitting, eyes shut in a wooden chair, and not worrying about a thing. The album is indeed subtle, with few flourishes and those that appear aren't long or loud, instead the songs are markedly sparse at times, floating along with echoey lyrics and shimmering cymbals. The tracks entitled "Kalamazoo," "Lullabye," and "As a fool, I will follow you" all held me in complete captivation, even more so with some of their extended playtimes. Now, I cannot promise everyone will get this tranquility for hearing Jura, but as with much competently done post-rock, ambient or what have you it has the potential for a dispositioned person to thoroughly enjoy it in a calmness unparalleled in other modern music.

To be had here:
Jura - Jura
Posted by Antarktikos at 8:02 PM