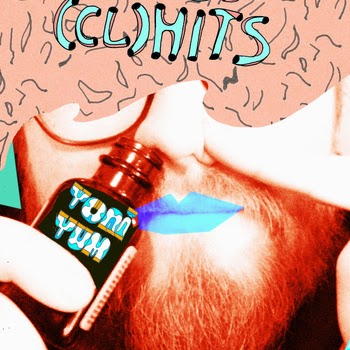 What we have here is a very washed out post-punk album outta Minneapolis. YONI YUM are an echoey, chaotically surreal display of snyth-driven avant-garde. The songs seem as if they were recorded live, which very well could've been the case, and it has that oddly leveled balance of sounds that comes from a bootleg record, with lyrics that aren't intelligible, keys and guitars warped and even the drumming got fuzzy somehow. Basically, it is pretty fucking cool and a real treat for a lo-fi advocate like myself. Reminds me of some of my favorite live show or rather obscure bands I've only gotten to hear in similarly recorded manners. Videohippos and Bubonic Plague may be the best examples of what I mean, but I am sure most of you won't know either of those. Not the goddamn point, there is something analogous in your music listening experience if you're the sort that goes to house parties with out of town bands, galleries that have fucked up modern art on the walls and kindly weirdos playing instruments or even spend too much time in the less crowded corners of the internet.

GREATEST (CL​)​HITS is best heard with good speakers or headphones, for otherwise what little fidelity existing on the recording will fade into a nonmusical mess. That being said, it is also very good with some extremely cheap beer in the system and maybe a whatever else you've on hand. It is artistic, but is an non-artsy way. Anti-classly, and I dig that, especially when it involves snyths.