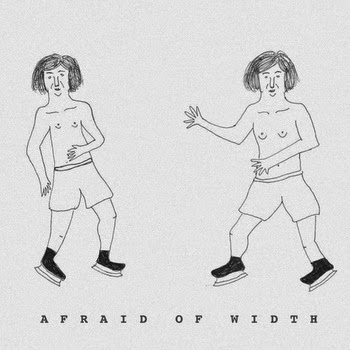 Piano-driven rock from Brazil, sung in English and absolutely brilliant. I am fucking serious people, this is just what you'd hope it'd be. So although 151515 sounds like the way I name files that go on my desktop by punching the keys my fingers happened to be resting on at the moment, the music is so much more than that.

Afraid of Width is the sort of album that makes me supremely happy while listening to. Unpretentious, quirky and resoundingly lo-fi indie pop. Yes, once again I find myself explaining why I like a very vocal album, and I am coming to realize my anti-vocals slant really pertains mostly to lo-fi rock with indie pop getting a pass nearly entirely. I'll admit that shit sung in a pop-song tone is catchy as all fuck, and only more so when in a Brazilian accent that one isn't used to hearing. The singing is out of sight, even when he's just saying 'baa baa baap baap ba' in the song "Orange Juice." Now, overall Afraid of Width has the mildly clunky, one-man-band mix as it is really multiple tracks laid on one another, which to do flawlessly is a fine skill. 151515 rather has that unpolished style that I waxed poetically about in the last post I did on Judas Equus. The intro paragraph on the bandcamp page even references Daniel Johnston, so you can imagine what he was going for there. The piano, guitar and drums are simple, and that is what I want from something cheerful. We can save the complex stuff for the post-rockers. I want my indie pop to get stuck in my head and keep bouncing around leaving me eager to get another fix of it. Mission fucking accomplished by 151515, especially in the tracks "Coming Home" "Missing Girl" and "Plastic Food."

I strongly recommend this album is you liked what you heard from The Pathetic and Elegant, Ry Smith or Bo White as they all join the upbeat tone with bummerish lyrics that makes a wonderful indie pop album. Finally, Afraid of Width is being put out by the Recife-based indie label Transtorninho Records, who looks like they've just gotten started releasing material digitally but I sure hope to hear more from.