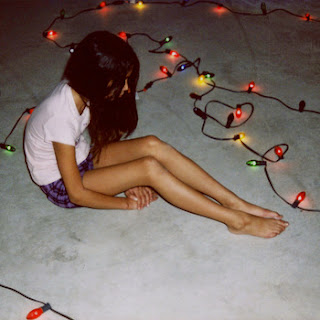 The Basement Demons are the sort of band that grabs your interest for what it is as much as what they sound like. What we've got here something akin to The Shaggs. If you're unfamiliar with the Shaggs I'd suggest you get to reading up on it, it is one of those wonderful underground phenomenons of rock music history. However, the basic concept was a father that had his four reluctant and untrained daughters form a band, envisioning them to become a famous act like he was living in a real-world Partirage Family. It didn't work out for him, but the band had some undeniable appeal with their poorly timed playing and bizarre singing.

While in what I hope and imagine is a less coercive fashion than the Shaggs, another family band was formed for a recording session. The impromptu Calgary band was made by a fella called Seth, a member of the SRM featured Soft Cure, who was joined by his younger sister and two female cousins. At the time they were 18, 7, 10 and 13 years old respectively. He said the girls had no experience using the instruments before and they recorded in a just a couple of days. The results are an extremely lo-fi set of tracks, so low is the production it easily crosses into the realm of no wave. Noisy, sludgy and filled with the screams and howls of young ladies the albums doesn't even attempt the pop sound at which the Shaggs faltered so infamously. Rather what we have are unadulterated noise rock experiments from the unpretentious and curious minds and unrefined handiwork of a mostly untrained musicians. It most assuredly has the outsider art appeal that many a young indie music fan explores for as they've grown sick of radio pop hits. Be warned there is no shortage of girl screams in the "songs," so keep your finger need the volume nob if you're gonna blast the album.

To be had here:
The Basement Demons - Baby Teeth
Posted by Antarktikos at 10:18 AM