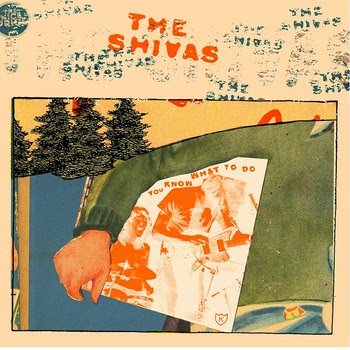 You Know What To Do is the latest in a series of albums the Shivas have put out of the last several years, and while I am not as familiar with all of them as many other garage rock outfits, they are a band I undoubtedly enjoyed each time I've had the good fortune to run across. The tunes are catchy, riddled with surf rock guitar and 60s psychedelic singing. It is like the Kinks took a few lessons from Dick Dale for many of the tracks, and it is wonderful. They diverge from this form for songs like "Big Mama Casio" that bears remarkable parallels to "Be Brave" by the Strange Boys. A similarity that is carried for several tracks, but with a more retro garage pop sound compared to the Strange Boys' country-tinged sound, and it is fused with some of that Julian Casablancas reverb vocals. Like the reverse of the same coin in some ways. You Know What To Do is undeniably has many familiar elements and to hear them so delicately swirled makes for an addictive listen.

The Shivas are a Portland, Oregon band that is getting some well justified press and some swell label backing. To Elvis's sure pleasure, this band is put out on cassette by Burger Records and to Larry's possible indifference it was released on vinyl and CD by K Records. Even got mixed by Larry's old boss, Calvin Johnson. Of course, being released by these hip labels makes the album an established PR and distribution network, something most of the bands don't have. What I mean is that this album is gonna do fine without my 2 cents, but I thought it was a good piece of art regardless and I'll call what little attention I can to it as well, if for nothing but personal gratification.

To be had here:
The Shivas - You Know What To Do
Posted by Antarktikos at 1:32 PM