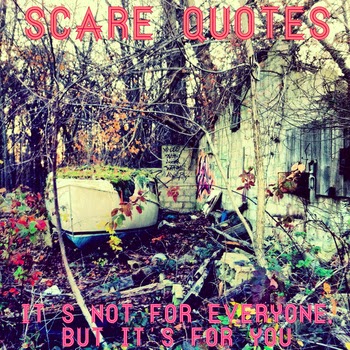 Scare Quotes is something I am shocked I haven't had a friend recommend to me. Every now and then someone bothers to do that still, despite me nearly never recalling what they've suggested. Not just because I am a dick, it's largely because I'm in a never ending race to listen to everything in my inbox. This is terribly hard to describe to my friends, most of whom never read any of this, so they say recommend something they're digging from source more mainstream (not that those are bad per se) than what I spend my time listening to for Spacerockmountain. Usually these bands and singers emerge as something I couldn't have avoided if I wish, hearing them in grocery stores and bars in trendier neighborhoods. Yet every now and then it seems this paradigm is inverted and it seems the catchy and band that could be justifiably popular gets to me and no one I know has heard of them. This time it came to me in the form of Scare Quotes.

So I sat on this album for over a month, that is how much I can get behind on listening to submissions. Yet when I put on the album after it nagging stared me down in the browser app on my phone for a couple weeks I wasn't paying attention too closely until second track, "High Life," started. Shit changed right then. The song remarkably easy to listen to, with the vocals forward and catchy pop patterns. The next track, "Hit the Highway," only reinforced my conception that this could very well become popular, as did "Burning Life" and "Faded Black T-Shirt." However, rather the eclectic songwriting takes turns with "Frozen Grapes" and "Time Enough at Last," which expose the album's wonderful truth. This is a bedroom project really, done by at home by musician Nick Ammerman, formerly of Advance Base, with a four-track recorder. Certainly the album is lo-fi, however it's employed with apparent skill and purpose. The album couldn't be as warm and inviting if it was produced more sophisticatedly. Hopefully these songs with get my traction and I'll hear them somewhere in my day-to-day, but even if they don't at least we got to hear them now.

To be had here:
Scare Quotes - It's Not For Everyone But It's For You
Posted by Antarktikos at 11:56 AM