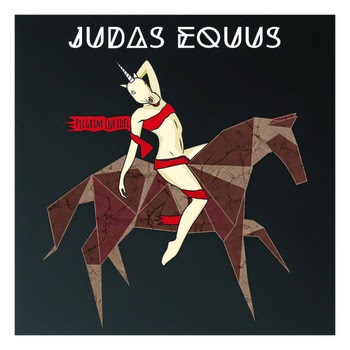 All week I've been commuting from my hometown, some sixty miles outside of Detroit, as I am watching the numerous dogs at my parents' house. The extra chores and fighting rush hour traffic has made for a good deal of time to listen to music, but very little time to write a word about any of it. On top it all I'm taking antihistamines just to stop my eyes from burning and to breathe through my nose with all these damn dogs here, thus I'm loopy and drowsy. Not sure my pitiful English skills can be relied upon.

Pilgrim / Infidel was sent into SRM by the fella that runs the Polish label, Resonating Wood Recordings. Seems he and the man known as Judas Equus were in the band Frank's Hard Drive together, whose EP I post a while back. Pilgrim / Infidel will to be familiar sort of album to close followers of the blog, falling into the lo-fi, unpolished folk style that I'm incredibly drawn to as evidenced by posting of Twin Man, Joshua October and The Wool, and even the fine indie pop/folk of Arvid. They're all, Judas Equus not least of all by any means, extremely talented musicians that have sat down and made something then chosen not to fuck around with it too much. And leaving it raw makes it endearing and relatable to someone like me, that hasn't the energy to see most projects through to a refined state. I'd argue things really don't need to be, especially as far as 'folk' music goes. The songs are remarkably catchy to listen to, and I think much of it is due to the unevenness and the strange lyrics as anything else. Judas Equus hooked me deep with "Prayer by Proxy" and "Wall of Screens" in this manner, and the instrumental "Si dormieris, non timebis: quiesces, et suavis erit somnus tuus" really shows off the bizarrely pleasant tone he's capable of invoking. Also, if you wonder why he sings such fine English in Krakow, it's because he's an expatriate, which  say only to explain the accent and as a counterpoint to what I must assume is my poor writing.

Lastly, I am gonna recommend you keep an eye on Resonating Wood Recordings as they're gonna be working with one of my favorite musicians, A Big Silent Elephant (a.k.a. A Man and His Broken Piano) who'll have a release via the label next month.

To be had here:
Judas Equus - Pilgrim / Infidel
Posted by Antarktikos at 9:36 PM