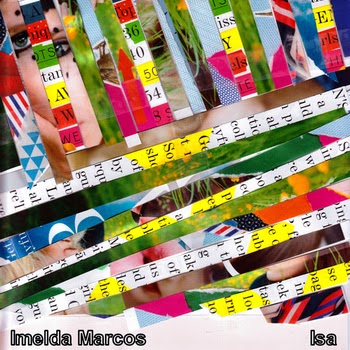 Despite the naming themselves for the former first lady of the Philippines and their album the Arabic name for Jesus, this Chicago duo hasn't a lick to do with Southeast Asia nor religious practices of any sort. In fact, I do believe  they're purposefully choosing seemingly random references to go with their creepy ransom note cover art to invoke a chaotic feeling. Then there's the music...

Now, if you got past my facetious introduction, I'll explain more clearly. Imelda Marcos makes the sort fine, angular experimental tunes known as math rock. They mention being compared to Don Caballero, Polvo and Make Believe, which I agree with completely and would further liken them to Hella and fellow Chicagoans Volta Do Mar. They're very capable of playing chaotic, fast and loud as they display in this album yet manage to keep all artful synced. I wouldn't call them noise as they're not giving way to dissonance, the mathy rhythms and patterned chord progressions are well established and create a hypnotic sound. Yet, it is balancing this with the crescendos of intensity, really showing off what a guitar and drum kit are capable of producing, that makes Isa a marvelous album. That's what I think they share with Hella, and of all the many projects of Zach Hill is still my favorite. The album is best heard first being to end, but the highlight for me is "Dresses The Colors of Crayons." That track is golden.

In a personal anecdote, I put Imelda Marcos in a long playlist of submitted material that'll likely make up the next week or twos write-ups. After throwing them on my iPod I hit play, not even having read the emails introducing any of the band, nor scoping out the bandcamp pages beyond clicking the download button. After over an hour of garage rock, noise, experimental tunes I found myself frantic sorting a huge stack of books on space exploration with the math rock of Imelda Marcos blasting. By the time I was done I was absolutely jittery and disorientated but very excited and amused at realizing I was only rushing my work to keep pace with the music. So maybe avoid it while doing delicate work, but I recommend it highly for crude manual labor.

To be had here:
Imelda Marcos - Isa
Posted by Antarktikos at 10:51 AM