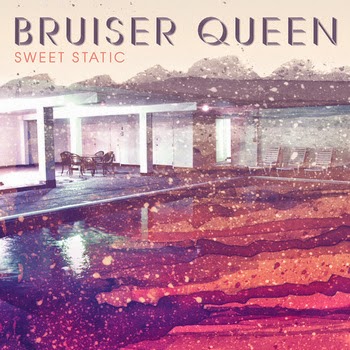 It feels like it has been too long since I have written up a Midwestern garage rock album. Not that I mind getting all the great stuff from Britain, France, Greece and elsewhere, but I was raised on the lo-fi sounds of these largely dull plains of grain crops with pockets of decayed industry. Of course I was raised in a much smaller satellite of Detroit (and just as plausibly Flint, as they're equidistance from my hometown) and it was still suffering from that same Midwestern plights of modern streamlined manufacturing, sprawling suburbs and racial division. And although I've never gotten the opportunity to visit St. Louis it isn't a leap in imagination to see how these are at work in that city like they are here in Michigan. A perhaps quite possibly because of these hardships, misunderstandings and struggle against what can appear to be a deepening decline there's a tremendous artistic outlet. The art takes many forms, but I'm always thankful that a particularly common medium is that of rock and roll and getting to savor many garage rock bands that form, tour, record and ultimately disband in this region.

Bruiser Queen falls very squarely in this tradition, with undeniable likeness to many bands I remember from my adolescence like K.O. and the Knockouts, the Fondas, the Detroit Cobras and Demolition Doll Rods. Now these references might've lost many readers, but all you need know is they were Detroit garage rock bands with awesome female leads, heavily distorted guitars and rhythmically pounding drums. I loved them all and when I hear more music that take off from a similar place with a likewise sound I am excited to hear it. So in much the same way I found the Gorlons, Blaire Alise & The Bombshells and Leggy to be so fantastic, Bruiser Queen has in turn captured my attention. So, yes Bruiser Queen is a two-piece from St. Louis with a female singer that truly knows how to belt out songs, but the production value of the songs is more intensive than one the older references I've made, and the very bass-laden distortion and fast-paced playing can be compared to Bass Drum of Death. Moreover her singing style, like that of Leggy, is like an amped up version Swedish garage rockers, by which I mean the words are loud but clear like Sahara Hotnights and the Hellacopters (seriously I am not trying to be pretentious, just spent too much time listening to garage rock. At least I avoided mentioning how Turbonegro Hates the Kids until now). Basically, what I could not say briefly was that Sweet Static is an excellent garage rock album and you should check it out.

To be had here:
Bruiser Queen - Sweet Static
Posted by Antarktikos at 9:30 AM