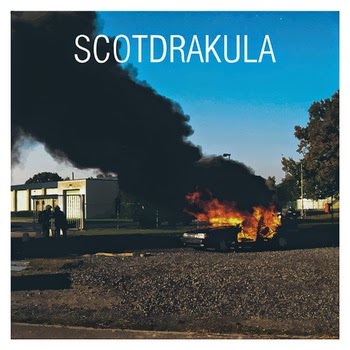 This self-titled full-length is the third from the Melbourne garage rockers known as ScotDrakula, after having put out 2012's BURNER and 2011's CRACKSTREGTH. Having appreciated those albums thoroughly I was understandably quite jazzed to see they've got something new to hear. Naturally, I am a very biased man, and like to express my opinions, otherwise I'd not have a music blog at all. Yet it is never a forgone conclusion that a follow-up will be as enjoyable as the earlier work. This is something we all know all too well, I'm sure. Yet when a band does it right, when it seems from the first listen that the latest album could very well be your new jam it is downright invigorating.

The songs aren't all that complex on SCOTDRAKULA. They needn't be, as they are garage rock. However, they are a stylized garage rock. The lead vocals of the band are of a sort that they're hardly comparable to other bands I've been posting over the years nor one's I can recall off the top of my head. And I don't mean Australian accented, he sings with something of an affected tone and a mild lisp. I like it a whole lot, and I don't know or care why. Still can't understand him well even on a few rehearings, gonna need more listens for that as it should be. The other thing I like about how ScotDrakula makes music is how it doesn't need to be intense, sometimes having a jaunty pop pace that is very charming. However, it can get fast as necessary or could just as easily slide into psychedelia. The composition is fantastic and the songs beg to be reheard. So you'll check out what these Australians are up to if you know what is good for you.

P.S. While the name surely has a vampiric theme, they don't seem to dress up as nosferatu. So lucky for our boy Elvis Dracula, I think he's got that game down, at least in this decade... we'll keep this 90s Spanish band from Gijón to ourselves: Doctor Explosion - Dracula Yé-Yé.
Posted by Antarktikos at 7:35 PM