I've gotten enough split EPs in lately I've decided to make them into a post of their own instead of throwing them into the EP Grab Bag (cause even at my ideal bimonthly rate there's more than I can reasonably post). So here three release with six bands, like a bunch of double barrel shotguns staring you in the face.


This spilt put out by the small label Lo-Life Recordings features two lo-fi rock acts with sinister names. The first three tracks are by War Party, whose sound is somewhere between shoegaze and pop-rock. Makes me think of another submitted act, Fun Guns, which is good for I've really been digging those cats still. Second three are from Doom Ghost and are more eclectic. Starts with a garage rock song, a British-esque rock number (think Follying Molly), and one's a shimmery lo-fi pop ditty that invokes the Beat Happening. Must admit both bands are impressive and a finely complimenting spilt. 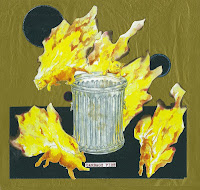 More from the several times featured band, Mother Night, but this time with friends sharing the bill. The two bands contrast more strongly than the previous spilt. Mother Night plays their finely done math rock, especially well on "Uprising of the Beast." The Dropouts on the other hand are some intense, abrasive metal that'll packed to the gills with powerful guitar and hollering vocals. A palate cleanser for sure, yet enjoyed by even a non-metal fan such as myself.

Another returning artist, Nate Henricks, shares more of his E6-style lo-fi psych-pop. This time with an epic track that exceeds 15 minutes. The Top Grossing Films of 1984, other than bearing a lengthy name, are a minimalistic lo-fi psych-folk that has qualities of Weird America stuff. For whatever reason the split this release into their respective bandcamp pages so to get it all you've got to go to each, so just click on each name to get there.
Posted by Antarktikos at 8:50 PM