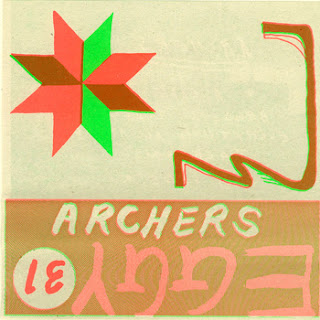 I'm old and I want to drink when watching bands, not stand next to giggly teenage girls flirting with pepperoni-faced Bieber impersonators. This year, however, I may have to go to Portland's annual, all-ages summer festival called PDX Pop Now! judging by all the great music that's on the festival's accompanying 2012 compilation (being released sometime in early June, in case anyone's interested).

Archers is one such band. Their music harkens to late 70's/early 80's punk and power pop, but with both an amplified tenacity as well as 60's rock influence. Really engaging and accessible punk rock and I can't believe I haven't listened to them until now. At times they sound like The Nerves, other times The Wipers. There's also elements of The Who in here. The Soft Boys are also a definite influence, and at times the vocals seem to almost channel Robyn Hitchcock.

This is a great 6 song ep they put out on Eggy Records, an awesome label run by a member of another great local band, The Woolen Men. It looks like the tape itself is sold out, but if you like their stuff, there's a link on the righthand side of their bandcamp page to buy a limited edition 7" for $5... when I bought mine there were only 9 left.

Archers are deserving of the attention they're getting in town, and I hope to catch them live soon.

Posted by Amazing Larry at 3:37 PM