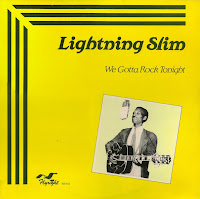 Lightning Slim (often billed Lightnin' Slim) was a blues musician born in St. Louis but ended up in Michigan working in a foundry when not playing. This is a posthumous compilation of some of his songs that cross the divide of blues and rock and roll (yet obviously blues-heavy rock). Numbers like "It Been A Long Time" and "Solider Boy Blues" are great examples of electronic blues, and others like the titular song "We Gotta Rock Tonight" show this guy knew how to play rock as well. He was recorded later than many of the bluesmen I've posted, only get on a single in 1954 and he was dead 20 years later of stomach cancer in Detroit. Nonetheless, he seems to be of relatively small fame compared to contemporaries and predecessors, but this cannot be due to lack of talent. Plus he must have one of my favorite monikers of all the blues musicians I'm familiar with.

To be had here
Lightning Slim - We Gotta Rock Tonight [320 kbps]
Posted by Antarktikos at 6:30 PM