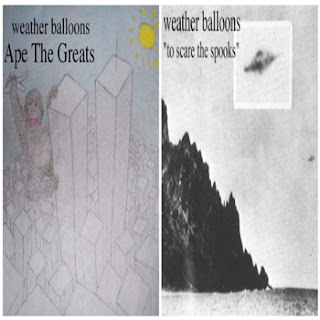 One of my favorite things, while flying into or out of a city at night, is imagining all the music being made down there. At that exact moment, while flying out of New York or Seattle or wherever, is music being recorded that I'll hear at some point over the course of my life. It's pointless to think about really, because there's nothing on the back of a record that says "recorded during that one time you flew over Austin on your way to Thanksgiving with the parents" that can remind you of those mid-flight musings. It's just one of those things I find myself doing ...lights on buildings that could be music clubs, street lamps under which musicians could be drumming on buckets, dim lights in apartment buildings where someone could be laboring over a 4-track and a drum machine... cities are like giant, electric english muffins, where in every nook and cranny is a light where someone is making or listening to music.

In one cranny of Brooklyn is a guy writing and recording music under the moniker Weather Balloons. The music is lo-fi twee punk with flares of indie, garage, and psychedelia all making appearances. Super catchy stuff. It's almost like a pop-punk Guided By Voices with vocals that, at times, remind me of Art Mitchell from the cartoon-punk band, Supernova. Also reminds me a little of another lo-fi Brooklyn band, who I think there's connection to, called Shark? (I'm not asking, that's the band's name). Interesting to note, looking over the Weather Balloons bandcamp page, you'll find a humor-meets-conspiracy-theory theme running throughout much of the design... firstly with the choice of Weather Balloons for the project's name... and then with titles like "JFKFC" and "Modern Warfare Is Free Marketing", a nod to hedonistic mystic Aleister Crowley's "The Book of The Law"(here retitled "The Book of The RAW"), and a faux JFK Jr. quote on his Facebook page that reads "George Bush Jr had nothing to do with my death." You get the picture.  I think his music is appealing enough without the touches of absurdity, but also do enjoy the unique twist.

12 songs, free from the artist.

Weather Balloons - Ape The Greats "to scare the spooks"
Posted by Amazing Larry at 7:30 PM