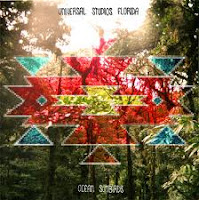 More than likely I am way behind on getting excited over this band, but I've never claimed to be timely. Universal Studios Florida made some exotic and breezy ambient electronic music for what I assume is their only full-length release, Ocean Sunbirds. It is a good remedy for the cloud-covered skies that have brought a certain degree of gloominess to my hometown as I take care of what I deem to be an excessive amount of Labrador Retrievers for my parents. In fact the more I listen the more the sun seems to be peaking out just like these songs have affected my mood for the better. Ocean Sunbirds could be the calmer, soothing cousin album of Pill Wonder's Jungle/Surf and Beat Connection's Surf Noir shares many qualities with it. Also, if you liked Monster Rally this should be right up your alley.

To be had here:
Universal Studios Florida - Ocean Sunbirds [320 kbps]