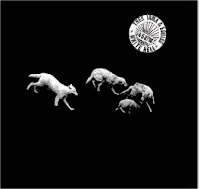 White Hell is an album by Swiss garage/psychedelic rockers Thee Irma & Louise. Sent in my a reader of this blog, it is a fine example of largely instrumental garage rock heavily influenced by surf and psychedelic themes. It can get somewhat loud and frantic, as it very well should, but also possesses a creepy, haunting tone to it makes it seem like the soundtrack to a raunchy, self-aware horror flick. The cinematic, or perhaps even video game-esque, is enhanced all the more my the skill employment of vaguely angular guitar and what I assume is an organ. I've already listened to it twice over while getting to the dramatic conclusion of an Orwell novel (I know that might not be fitting). Nevertheless, it is solid and thanks to Wo0osh for sending this album my way.
To be had here:
Thee Irma & Louise - White Hell [256 VBR kbps]
Posted by Antarktikos at 9:58 PM