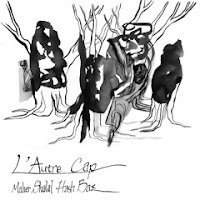 While this is hardly anything new or surprising, I do love Maher Shalal Hash Baz. Japanese musician who, if I remember correctly, isn't really trained and works with musicians largely of the same 'unprofessional' ilk. Nonetheless, it makes for some great lo-fi experimental pop music. L'autre Cap is really just my favorite of his albums at the moment, but that changes pretty regularly so all of them are recommended listening to be sure. It is long and has several versions of tracks, don't worry about it, just get some beer in you as I've done and let the absurdly beautiful sounds flow into your ears. Lots of starts and starts the seem out of place, changes of tempo or a lack of tempo altogether, less than harmonic singing, so on and so forth. Really the key to enjoying Maher Shalal Hash Baz is paying attention to the subtleties timing between chaotic and rhythmic sections.