This is a companion post to the Epsilons from two days ago. The Traditional Fools is another bands fronted by Ty Segall, so if you're getting tired of me posting about his projects I'm gonna have to say too bad. I'm absolutely certain these releases have been kicked around blogs since they came out, but the completist in me couldn't pass up sharing them for myself. Basically, they're very similar to the other work that came out around this time in which Segall had a hand. It is fuzzed out, hollering, noisy garage punk of the highest order. From what I've been able to dig up on the Traditional Fools is that the band was rather short-lived, or on a hiatus, but did manage to make a full-length and I also found a live album, Live at Wizard Mountain. It features some of the more overtly surf rock songs I've heard from Segall-involved projects. The sound quality is not the finest. However, the kind of music the Traditional Fools made isn't hurt overly much by that, in fact I find it somewhat charming. Hope you're as euthused as much as I am by all things Segall, and I do plan on posting some other garage bands soon but let me know if there is something else you're hankering for. I've got a lot of music lying around that I don't know if anyone wants.
To be had here: 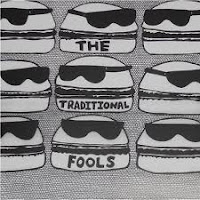