I guess it was inevitable that I shared this band. They are garage punk, from Montreal, and remind me of Oblivians. From what I've read this one of several garage acts to emerge in Montreal after the Spaceshits and others started bouncing around there in the 90s. Anyhow, also like the fellas from the Spaceshits (albeit in later projects) they've made friends with Black Lips and eventually got albums released by In The Red. What I've got posted here today are the three full-lengths I could find by them, and I haven't gotten around to the more tedious search for any singles and splits that undoubtedly must be floating about. The self-titled is quite fuzzed out but somewhat generic of what is around. This is not to say it isn't good though. On the next, Satan's Little Pet Pig, the production quality is reasonably enhanced and they stylistically come into their own more. Finally, The Defrosting Of... is a well-rounded release that shows them sounding more like one of their influences, the Rolling Stones. Rather swell sounds.
To be had here: 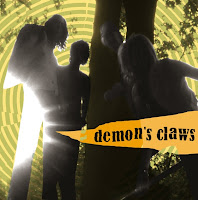