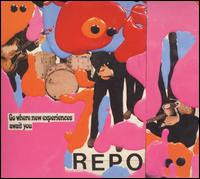 Oh boy, how could I have missed this release? Somehow it never registered with me that Black Dice must've had new something out, and I am entirely sure one of the numerous bloggers I follow posted this album at sometime. Notwithstanding, I just downloaded and gave this album a good whirl. The style is very much similar to the earlier albums of the band, or as AllMusic aptly put it "as engaging and deranged as ever..." and that's nothing to scoff at. Repo is a great name for the album as it sounds like they took sound bites and melodies then shred them up and reconstituted it all as something remarkably fun to hear. If I had to pick a favorite song it'd be the cutely titled "Chicken Shit" but don't take my word for that. Anyhow, I think this band has been thoroughly enough spread about that you should know if you like their brand of electro-noise sensationalism.
To be had here:
Black Dice - Repo [224 VBR kbps]
Posted by Antarktikos at 9:13 AM